Eyesore of Bathinda to be converted into a land of opportunities, asserts Aman Arora

Punjab Government led by the Chief Minister S Bhagwant Mann will develop the 1464 acres land of the now-closed Guru Nanak Dev Thermal Power Plant in a planned manner in Bathinda, said Mr. Aman Arora, Housing and Urban Development Minister, on Saturday, during his visit to Bathinda.

While inspecting the 793 acres of Ash Dyke Area of the defunct Thermal Plant, the Cabinet Minister directed the Bathinda Development Authority (BDA) officials that the survey of the land should be done by IIT Kanpur to ensure the optimum use of the land. Mann⁩ Government will not leave any stone unturned to convert this eyesore of Bathinda into a land of opportunities, he added.

After holding marathon meetings with Resident Welfare Associations and Developers, the Cabinet Minister also visited the Urban Estate-6 and 7 and asked BDA officials to develop these sites within given time-frame so as to ensure the planned development.

He said that Punjab Government has a crystal clear vision for urban development unlike previous governments, which created a mess in the name of development and haphazard development and illegal colonies were the result of their development plans but now people of Punjab will feel and watch the real planned development, he categorically said. 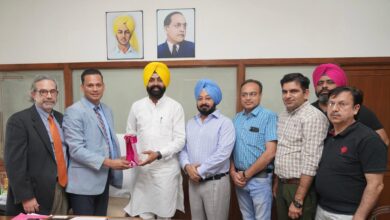